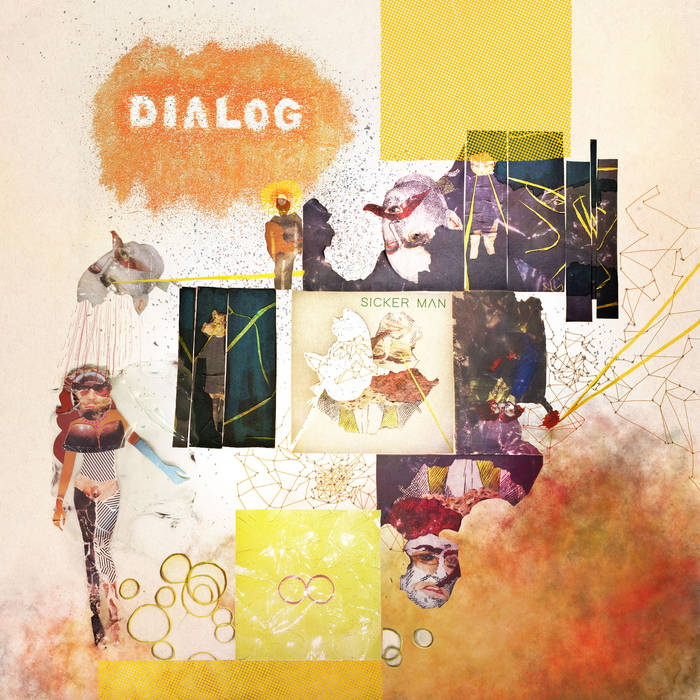 Sicker Man - Dialog
As if on the way to a marriage, we hear a Turkish marriage orchestra playing in the background as this record starts. It was on a series of Saturday evenings that Sicker Man left his apartment to embark on his new journey, each time passing the Turkish wedding hall, as the music was summoning the guests to the ceremony. But Sicker Man didn’t marry anyone. Instead he was out for an encounter of a different sort, walking to a recording studio to meet another musician, no prepared material in hand, just his instruments, his gear, and his ear.

When two musicians meet in such a way, we tend to think of it in two ways: as occasion for an “improvisation“ or as a “jam session”. The improvisation is on the artsy end of the scale, suggesting the supreme inventiveness of the genius that already knows all the rules of his art and therefore needs no written script. The jam session, on the other hand, is on the informal and social end of the scale, suggesting an interaction that is mainly about the coming together, a moment of agreement and union, enabled by a shared taste and background.

Listening to this record, it is evident that what happened in the recording studio was neither – neither an attempt at artful improvisation that thinks of itself as the expression of sovereign mastery, nor a celebration of togetherness, a kind of pre-established agreement always in danger of a lack of attention to difference. The people that have encountered each other in these recordings are neither united by the mastery of a shared craft nor simply by a shared taste and familiarity. With many of his partners, Sicker Man is playing for the very first time on the tracks we hear on this record. But if this is neither an improvisation nor a jam, what is it? As the title of the record suggests, these encounters, not unified by mastery or background, are “dialogues.”

When we think of dialogues, we tend to have in mind conversations in which two distinct voices alternate. The fact that there are two separate voices, and not the one voice of a monologue, already seems enough to threaten the very unity of the discourse. That’s why dialogues usually rely on all kinds of schemata that preserve their coherence: question – answer, thesis – antithesis, proposition – objection, suggestion – amendment, opening – closing. The minimal and formal schema we use to preserve the coherence of dialogue is turn-taking: first you, then I, then you, then …

The dialogues we hear on this record don’t rely on such schemata of conversation. When you listen to these tracks, it seems impossible to think of the contributions of Sicker Man and his partners as asking and responding, as proposing and objecting, as beginning and completing. It doesn’t even seem right to suggest that the involved parties are taking turns. If this record collects dialogues, it must be dialogues of a different sort.

The word “dialogue” stems from the Greek expression “dialogos”, connecting the words dia and logos (word, speech, discourse, reason). Even though the word dia is etymologically related to “two” and hence gives rise to the image of a twofold speech, its literal meaning actually is “through”, “in the midst of”, “between”. Taken literally, a dialogue is therefore what arises through the words, in the midst of and between them. The dialogue does not consist in the words of either side, but what occurs between this word and that word, this reason and that one. The dialogue is what occurs in the thick of it, where one word touches the other, one voice adds to or interferes with the other.

In this sense, the music of Sicker Man has always been a dialogue: It has always explored the superimposition of voices that he orchestrates in live loops, creating an ever more dense midst of voices. On this record, his inner dialogue opens up to the inner dialogue of others. And it seems, there are no rules for this game, save the shared attentiveness to what happens in-between.

What we hear in these “dialogues” is thus not the romantic or legal union of a marriage; it is not the skillfulness and artfulness of improvisation; nor is it the manly agreement of a jam. What we hear in these dialogues is one word sounding through the other. It thus resembles the superimposition of a double exposure. Like in a doubly exposed photograph, the individual elements become both more ethereal and more defined. They touch and blend, align and dissociate at the same time and take on the remarkable capacity of ghosts: the ability to inhabit one another, one voice speaking through the other.

What this resounding double exposure brings out is not your word or mine, your reason or mine, but the very medium of our encounter: time. Or, as the French writer Patrick Modiano once wrote: “Tout se confondait par un phénomène de surimpression – oui, tout se confondait et devenait d’une si pure et si implacable transparence... La transparence du temps.”